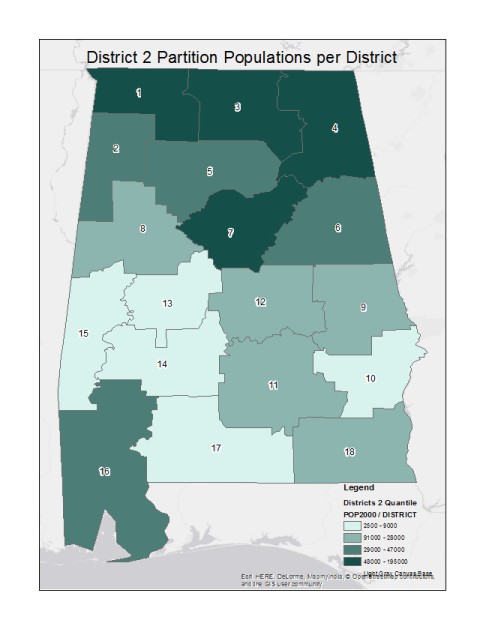 In 1934, Openshaw illustrates that “real units (zonal objects) used in many geographical studies are arbitrary, modifiable, and subject to the whims and fancies of whoever is doing, or did, the aggregating.”

When aggregating data in geographical information science analytical circles, one of the pitfalls of statistically analyzing geographic information is the Modifiable Areal Unit Problem (MAUP). MAUP results in two fundamental distorted outcomes – the aggregation of statistical data becomes closer to average of all overall data, the aggregation effect. The second outcome, known as the zoning effect relates to the differences of results related to the use of other aggregation schemes.

Therefore, it is possible for one to aggregate datasets to create results advantageous to a pre-determined outcome, due to the arbitrary nature of how one aggregates the data!

In this edition of the Daily Planet, we shall investigate the effect of MAUP and how it helps in the Gerrymandering of Alabama Congressional Districts.

In this study two sets of choropleth map displays will be utilized to show ratio or unique values categorical data per geographical region sampled. The maps will be easily discerned color scheme relating to the results of the sampling.

The first set will show Alabama’s US Seven Congressional Districts and whether that district is represented by a Democrat or Republican and the second map in this pairing will show a similar situation except it is at the county level and how that district voted in the 2008 Presidential Elections by whether it voted for Obama (Democrat) or McCain (Republican).

The second set of maps will show 2000 Census Population data per district. With the same number of districts but drawn very differently, the results will vary differently from one method to the other.

Firstly, what is Gerrymandering?

According to dictionary.com, to Gerrymander is “the dividing of a state, county, etc. into election districts as to give one political party a majority in many districts while concentrating the voting strength of the other party in as few districts as possible.”

This topic is probably the easiest illustration of MAUP as it involves, quite frankly, the manipulation of statistical data in order to create (arbitrary) political districts that help the reigning state political party win elections and contain the minority party.

It’s important to understand US Congressional (“House”) districts are created by recent census data, particularly population, to distribute how many House districts a state will have in its US Congressional delegation. However, it is usually up to state legislatures to divide the state into the political districts, which often more than not create “safe seats” for the reigning party and the minority party – the election game has been rigged to favor political incumbents of either political party.

In the first pair of maps (refer to figure 2, 3 & 4), maps have been created to reflect the both political districts and which political party it affiliates with. The only differences are at what level of analysis we are choosing to commit to at the political level – whether national or county. Because of the lack of information related to current county levels of presentation, we substituted those party affiliation numbers with how each county voted in the 2008 Presidential Election by voting percentage per county.

In figure 2, the seven Congressional Districts are labeled by party affiliation – red for Republican and blue for Democratic representation. This map’s scale is at the national level, while the next map will be at the county level.

A classic case of MAUP, the aggregate map (Figure 2) shows a substantial loss of detail when aggregate data is produced from a lesser data set (Counties) towards a higher data set (US Congressional Districts).

While the seventh district affiliates Democratic, the rest of the political map trends Republican due to how the state has gerrymandered the political map. It’s truly interesting to see how the center of Alabama – which voted Democratic in 2008 is represented in 2016 by a Republican Congressman!

(Included in the appendix, I also include maps that are based on racial composition. Those counties with majority Black/POP trend Democratic and while majority White/POP trends GOP.)

Figures 5 and 6. District 1 versus District 2 Paritions and Population (POP/District Quantile)

In the second pairing (Figures 5 & 6), two sets of political districts are created and weighed by 2000 census population data. Districts with a deeper hue of blue-green will have higher populations, while those which have lighter hues are less populated.

Through the partitioning of districts to whether include or exclude major urban areas different results are created with the same division of space (18 Districts).

These two figures are included to show how politicians can easily gerrymander political divisions to suite their political ends or how state non-political bureaucrats may skew their data to produce different results which affect public policy!

Hopefully, these figures help illustrate how MAUP helps gerrymandering – the manipulation of political districts to ensure political outcomes. Though the public may be ill-informed about MAUP and its relationship with gerrymandering, the understanding of why it occurs is important to our maintaining democracy and keeping our government accountable.

iThere are no comments

Begin typing your search above and press return to search. Press Esc to cancel.